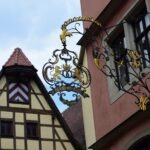 Rothenburg ob der Tauber is famous for it’s amazingly well-preserved medieval old town, making it a destination of choice for tourists from around the worlda. It lies inthe Franconia region of Bavaria, Germany. It lies on Romantische Straße – a popular themed route through southern Germany. Today it is one of only three towns in Germany that still have completely intact city walls, the other two being Nördlingen and Dinkelsbühl.

The city was most likely inhabited by Celts before the 1st-century C.E. In 950, the weir system in today’s castle garden was constructed by the Count of Comburg-Rothenburg. In 1070, the counts built Rothenburg castle on the mountain top high above the River Tauber. Unfortunately the dynasty died out in 1116. The last count, Count Heinrich, Emperor Heinrich V appointed instead his nephew Konrad von Hohenstaufen as the successor to the Comburg-Rothenburg properties. Rothenburg was a Free imperial city from the late Middle Ages up to 1803. In 1884 Johann Friedrich (von) Hessing (1838–1918) built Wildbad Rothenburg o.d.T. 1884–1903.

By the end of World War II, German soldiers were stationed in Rothenburg to defend it. On March 31 allied planes dropped bombs on the historic city, killing 37 people, destroying over 300 buildings, nine watchtowers, and over 610 m of the walls. Fortunately the U.S. Assistant Secretary of War, John J. McCloy, knew about the historic importance of Rothenburg and demanded of US Army General Jacob L. Devers not to use artillery in taking Rothenburg.

Battalion commander Frank Burke, a future Medal of Honor recipient, ordered six soldiers of the 12th Infantry Regiment, 4th Division to march into Rothenburg on a three-hour mission to negotiate the surrender of the town. When stopped by a Germans,  soldiers explained that they were “bringing them an offer to spare the city of Rothenburg from shelling and bombing if they agree not to defend it.” The local commander Major Thömmes surrendered the town, ignoring the order of Hitler for all towns to fight to the end, and thereby saving it from total destruction by artillery.

American troops occupied the town on April 17, 1945. In 1948, McCloy was named an honorary citizen  of Rothenburg.