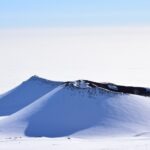 Etna, known to Romans as Aetna and to Greeks as Αἴτνα, is a massive, active stratovolcano dominating east coast of Sicily, Italy. It rises above the convergent zone of African and Eurasian Plate. It is the tallest active volcanoe in Europe, as well as tallest peak in Italy south of the Alps with a current height of 3,326 m, though this figure varies with summit eruptions.

Etna covers an area of 1,190 km2 with a basal circumference of some 140 km. This makes it by far the largest of the three active volcanoes in Italy, being about two and a half times the height of the next largest, Mount Vesuvius. Only Mount Teide on Tenerife in the Canary Islands surpasses it in the whole of the European–North-African region west of the Black Sea.

This was our third visit to Etna – with the usual gondola ride from the Refuggio Sapienza. The weather was stunning with the summit rising from a vast sea of clouds reaching horizon in each direction and white snow under perfect blue sky. Again – the main crater was out of reach as there is conituned elevated  risk of eruption. Therefore we could only reach the craters of Torre de Filosofo, with small vents of hot air at its edge.

The main crater did show some activity with at least one stronger eruption producing nice explosive sound and a mushroom shaped cloud.