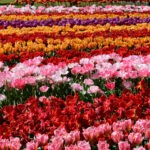 Keukenhof also known as the Garden of Europe, is one of the world’s largest flower gardens. It is situated in the municipality of Lisse, in the Netherlands in the area called the “Dune and Bulb Region” (Duin- en Bollenstreek).  It has an area of 32 hectares. Approximately 7 million flower bulbs are planted in the gardens each year. Keukenhof is widely known for its tulips, it also features numerous other flowers, including hyacinths, daffodils, lilies, roses, carnations and irises.

Keukenhof is only open to the general public for a world-renowned 8 week tulip display from mid-March to mid-May, with peak viewing arriving near mid-April, depending on growing season weather, which varies annually.

Keukenhof is situated on the 15th-century hunting grounds of Slot Teylingen. It was the castle’s kitchen garden (thus the name: keukentuin), providing game, fruit and vegetables. In 1638, the estate was purchased by Adriaen Maertensz Block, captain and governor of the VOC. In 1641 he built a large manor house, which he named Keukenhof, now known as Castle Keukenhof. In 1857, Baron and Baroness Van Pallandt, at the time owners of the estate, tasked landscape architect Jan David Zocher and his son Louis Paul Zocher, to redesign the park and grounds around the castle. Those parks, designed in English style, remain the foundations for the gardens.

The park as it is now known, was established in 1949 by a consortium of bulb growers and flower exporters to showcase their products and support the export industry. The garden opened to the public in 1950. It operates under a charitable foundation of Count Carel De Gaaf van Lynden.