New day and new direction on Isle of Skye, which is already turning violet due to blooming heather fields. 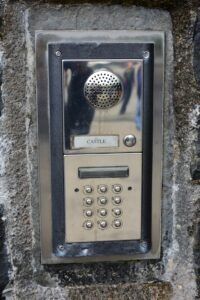 A thing that sets Scotland apart is the amazing combination of both landscapes and history. Which come together especially in places like Dunvegan Castle. The entrance to the seat of MacLeod of MacLeod – Sìol Tormoid , chief of the Clan MacLeod is … almost a jest. Yet this castle has been and still is a home to the same family for over 800 years, more than 30 generations.

Most probably the site has been fortified from the earliest times, yest the first records of a proper castle date to13th century. It is built on an elevated rock overlooking an inlet on the eastern shore of Loch Dunvegan, a sea loch and surrounded by one of the most splendid gardens we had a chance to visit. If – for some misfortune – you’d have an opportunity to visit one castle in Scotland – that one should be Dunvegan. Though there are so many more.

Then there is the castle istelf. It e occupies the summit of a rock some 15 m above average sea level, which projects on to the eastern shore of a north-facing inlet or bay. On the landward side Dunvegan Castle is partially protected by natural ditch. The promontory was enclosed by a curtain wall in the 13th century, and a four-storey tower house was built in the late 14th century. Alasdair Crotach, the 8th chief, added the Fairy Tower as a separate building in 16th c. During the next century, new ranges of buildings were put up between the old tower and the Fairy Tower, beginning in 1623 with the state apartment built by Ruaraidh Mor -15th chief. The old tower was abandoned until the late 18th century, when the 23rd chief began the process of homogenising the appearance of the castle. This process continued under the 24th and 25th chiefs, with the addition of battlements and the new approach over a drawbridge from the east. The present appearance of the castle dates from around middle of 19th century. 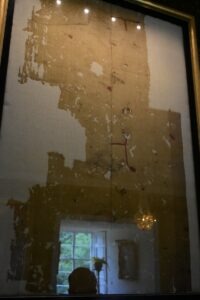 Such a history comes with many legends and actual artifacts, of which the most precious is Fairy flag – known for the numerous traditions of celtic fairies, and magical properties associated with it. According to the legend the fragile silk banner was given to the MacLeods by Titania the “Ben-shi”, wife of Oberon, king of the fairies. The silk of the flag has been stated to have originated in the Far East, and was therefore extremely precious, which led some to believe that the flag may have been an important relic of some sort. Others have attempted to associate the flag with the Crusades or even a raven banner, which was said to have been used by various Viking leaders in the British Isles.

Parting with Dunvegan we setoff to reach the most westrly point of Skye – Neist Point – Rubha na h-Eist – with a pictoresque Neist Point Lighthouse overlooking the sea since 1909.

On the way back to our lodging we stop at take a sunset stroll to the Dun Beag Broch – ruins od Iron Age fort which stands on Cuillin Hills overlooking Loch Bracadale. Even if the remaining walls are just around 2 meters high their 4 meter width and diameter of about 14 meters say a lot about people who lived and raised these forsts some 2000 – 2500 years ago. These round stone towers are only found in Scotland.